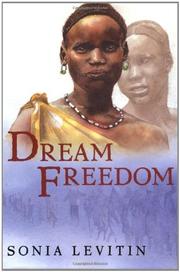 Writing from several points of view, Levitin relates the story of modern-day slavery in Sudan and of the destruction of village and family life that civil war has brought to that beleaguered country. Marcus, a grade-school student in the United States, learns about the situation in Sudan from his teacher, and with his classmates, raises money to contribute toward buying slaves their freedom, which can be purchased for as little as 50 dollars. Dabora, a slave in northern Sudan, dreams of freedom and of the daughter she left behind in the ruined village that the soldiers destroyed. The daughter, who now lives with an old woman in the village, often asks the old woman about the mother she barely remembers and the father whom the soldiers murdered. Two twin girls, wondering where their father disappears to so often and suspecting him of having an affair, follow him one night and discover that he helps rescue slaves, a dangerous activity that could easily get him arrested, or worse. Aziz, 12, the son of a wealthy family who have always had slaves to take care of the cooking, cleaning, farming, and any other menial and undesirable job, also makes a discovery on the day his father allows him to go to work with him. As he watches his father trade arms for slaves, Aziz is shocked and horrified when his father beats one of them. Aziz knows that one day, when he is older, he will fight to abolish slavery from his country. While well-meaning and certainly instructive, this novel works less well on a literary level. The author has written the book to make young readers aware of the problem of slavery in Sudan and the story and characterizations suffer as a result. The chapters are choppy and the connections between each of the chapters and its characters are hard to follow. The language is often opaque and unclear. Although the story is intended for 10-14-year-olds, readers older than Marcus, the character who ties the story together and who seems to be a fifth- or, at most, sixth-grader, will find him immature and hence be put off the story. (Fiction. 10-14)