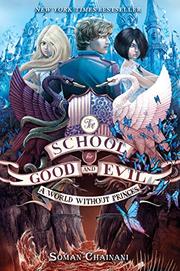 A WORLD WITHOUT PRINCES

From the School for Good and Evil series, volume 2

In a middle volume framed as a battle of the sexes, the author pulls some clever switcheroos (The School for Good and Evil, 2013).

A sincere if ill-timed wish summons Agatha and Sophie back to the twinned School for Good and Evil—to find it transformed into separate schools for girls and for boys. The latter is filled with brutal, callous, unwashed louts led (at first) by vengeful Tedros of Camelot. A scary new dean in the former has changed the fairy-tale textbooks to make all the male characters evil and instituted radical policies for the girls: “We wear pants, we don’t do our nails…we even eat cheese!” Though Chainani tries to keep the rival camps entirely separate by leaving out any hint of sex or even (a mighty pull between Agatha and Tedros aside) romance, Sophie’s temporary transformation into a boy at one point to sneak into the other school leads to a tender scene with Tedros. Another character turns out to be a spell-disguised boy who just preferred the girls’ school. Readers will be drawn in by set pieces, including the currently obligatory Hunger Games–style competition, but nearly all turn out to be incidental to the broader plot, which ends, of course, in a cliffhanger.

The closing volume should tie up those loose ends with, if the first two volumes are indicators, wild swings of terror and hilarity.