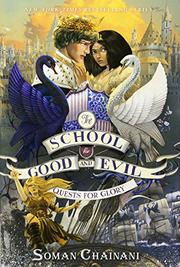 From the School for Good and Evil series, volume 4

A sudden rash of kidnappings and random violence kicks off a major challenge to the reign of King Arthur’s newly crowned son, Tedros.

The shining titular promise of the previous episode, The Last Ever After (2015), fades as Tedros—noble at heart but paralyzed by self-doubt and, it must be said, dumb as a box of rocks—refuses to ask his clever, loving fiancee, Agatha, for help dealing with pirates and other raiders. Meanwhile, back at the titular school, her glamorous BFF, Sophie, newly appointed Dean of Evil, discovers that all of the fourth-year students are somehow failing in their obligatory, assigned Quests. With a crew of allies (including Nicola, a nonmagical but quick-witted Reader), Agatha and Sophie set out to investigate and discover amid a characteristic mix of tongue-in-cheek set pieces and harrowing scrapes that a (possibly) legitimate contender for the throne of Camelot has risen, with deadly powers including (apparently) the ability to twist and corrupt storylines with “different truth.” In a slow-to-arrive but catastrophic climax, Agatha, Tedros, and the rest discover too late that they’ve been thoroughly played throughout; the final pages find them not only routed in battle, but tricked into a series of devastating betrayals. Bruno’s polished vignettes add appropriate notes of humor and horror and reveal Nicola to be black, in contrast to the mostly white or pale-skinned cast.