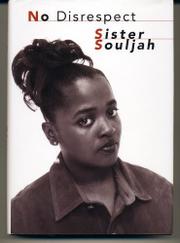 It must be hard being right all the time, but controversial rapper and black activist Sister Souljah doesn't mind, judging from her remarkably smug, occasionally uplifting memoir. Let there be no doubt, this ``young sultry, big, brown-eyed, voluptuous, wholesome, intelligent, spiritual, ghetto girl'' has opinions. She is for belief in God, hard work, self-respect, community service, political activism, a strong family structure, and black women sharing their men in the face of a huge supply-side shortage. She is against abortion, narcotics, the welfare system, interracial dating, and homosexuality. Passionate in all things, Souljah's juxtaposition of her activism and her active hormones can produce odd results. When a man she wants turns up at a committee meeting, she recounts: ``I...set to work on how to organize Black students across the country into an African student network. With moist panties and a body that wanted to be touched...I argued that most African students were confronted by the same problems.'' Souljah's political beliefs frequently become little more than sidelines to her accounts of failed romances—indignant stories of a strong, single, sexy black heroine and the brothers who let her down. The men who fail come in all varieties (from her father to her mother's lovers and her own), but Souljah concludes that their shortcomings are the result of centuries of white racist oppression—psychological, political, cultural. Ultimately, the book reveals the psyche of a young black woman who feels she has been betrayed by too many and who trusts no one. Everyone disappoints her. After eight chapters (each named for the guilty individual in question: ``Mother,'' ``Nathan,'' ``Mona,'' etc.), a predictable pattern emerges in which Souljah's initial optimism wears off and gives way first to rationalization, then to harsh condemnation. Part fiery political diatribe, part searing sexual history, part unintentional psychological profile, Souljah throws more heat than light.