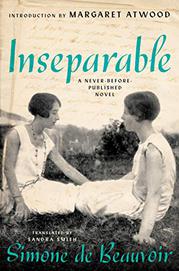 This previously unpublished novel by towering French existentialist intellectual and feminist icon Beauvoir, written in 1954, is based on her deeply formative relationship with a classmate.

"When I was nine, I was a very good girl." So begins the story of Sylvie Lepage's friendship with vivacious Andrée Gallard. They meet at school, vie for top honors, and become inseparable. Sylvie adores Andrée, the second of seven siblings in a family old, distinguished, and militantly Catholic. Her father chairs the League of Fathers of Large Families. As the girls grow older, the expectations and obligations heaped on Andrée become increasingly onerous, crushing her spirit and threatening her health. Sylvie loses her faith, whereas pious Andrée despairs of pleasing God and comes to fear her own capacity for passion. Bright, sensitive, musical, and artistic, Andrée struggles to be the dutiful daughter her family, church, and society demand. "Behind her, she had this past; around her, this large house, this enormous family: a prison, whose exits were carefully guarded." Sylvie, meeting her friend for coffee, thinks: "All around me, women wearing perfume ate cakes and talked about the cost of living. Since the day she was born, Andrée was destined to be like them: but she wasn’t." A lively introduction by Margaret Atwood gives the history of Beauvoir's friendship with Zaza Lacoin, the Andrée of the story, describing it as "a wellspring" for everything Beauvoir subsequently wrote. The book's dedication to Zaza asks: If I have tears in my eyes tonight, is it because you have died, or rather because I’m the one who is still alive? In a letter to Simone, included in the afterword, Zaza wrote: "There is nothing sweeter in the world than feeling there is someone who can completely understand you." The tragedy of Zaza's death at 21 haunted Beauvoir, yet when she showed the manuscript of this novel to Jean-Paul Sartre, he dismissed it as trivial. It is, after all, only about two young women. As Atwood says, "Mr. 'Hell is other people' Sartre was wrong." It is heartbreaking to think of the author, with her brilliant, incisive mind, absorbing Sartre's casual misogyny the way the tragic heroine of this book absorbs the narrow-minded values that destroy her.

A moving portrayal of intense female friendship, identity, and loss.