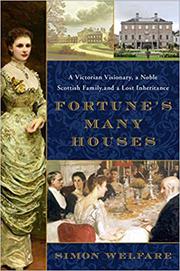 A Victorian Visionary, a Noble Scottish Family, and a Lost Inheritance

The story of two British aristocrats who aimed to change their world.

TV producer Welfare creates a vibrant portrait of British society through his animated, well-informed dual biography of John Gordon (1847-1934) and his wife, Ishbel (1857-1939), the Marquess and Marchioness of Aberdeen, who were his wife’s great-grandparents. Drawing on copious family papers—letters, diaries, rent books, financial ledgers—as well as the couple’s joint memoir, Welfare follows the peripatetic lives of John and Ishbel, famous among their incredulous peers for their devotion to social reform. Luminaries of high society—the Archbishop of Canterbury, members of the royal family, and even Queen Victoria herself were among their many guests—they spared no expense on their reform efforts. Even cruising the Nile River on their honeymoon, they set up “impromptu clinics” to address dire health needs: “the first of countless enlightened, innovative, and often expensive ways in which, over nearly sixty years, Johnny and Ishbel worked to improve social conditions wherever they went. And they cared not a hoot if they risked the contempt of their peers by taking their campaigns to the slum dwellers.” Welfare unfolds his narrative by focusing on the grand houses in which Lord and Lady Aberdeen lived in London, Ireland, Canada, and Scotland. Just outside Aberdeen, Ishbel founded the Haddo House Association, which “acted as a virtual school, allowing housemaids and cooks to study at home in their quarters or in the servants’ hall,” with local ladies “cajoled into acting as tutors.” In Canada, she established the Victorian Order of Nurses to attend to medical needs in remote areas. Her campaign to address the spread of tuberculosis in Ireland earned her the derisive nickname “Viceregal Microbe.” As the author demonstrates in this fluid narrative, the couple persisted in their charitable projects even when house expenses, travel, failure of several Canadian ranches, and years of generous hospitality brought them to the brink of bankruptcy.

A fresh, engaging cultural history of the rich doing good.