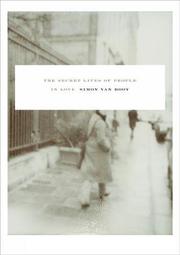 THE SECRET LIVES OF PEOPLE IN LOVE

The 18 brief, elliptical stories in this debut collection rely heavily on mood and lyricism. Their narrative strands are often gossamer. In “Distant Ships,” a Welsh package sorter agonizes over his son’s long-ago death, which chased away his wife and made him forswear speaking. “Apples” involves a Russian-born cobbler mourning his wife and daughter; he nurtures the apple seedlings indoors through winter, then plants them in a vacant lot year after year, creating an orchard that spawns Brooklyn’s only apple festival. Young Edgar, bereft after his mother’s demise, meets a mysterious turbaned man who teaches him how to reconnect to the sensory world in “Where They Hide Is a Mystery.” Van Booy’s clean, simple, delicate prose suits the material’s sadness: It’s hard to imagine a more arresting précis of isolation than, “Serge’s only other friend was a blind tobacconist from Ukraine called Peter, who when not being beaten by his wife played obsolete military songs on the accordion.” Yet for all their somberness, these stories exude an abiding sweetness. The characters cling to optimism, even to love, despite their frailties and straitened circumstances.

Marred at times by sameness of tone and occasional lapses into preciosity, but lovely and genuinely touching. This talented author bears watching.