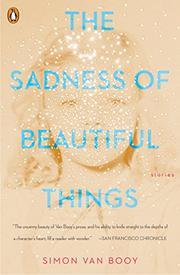 THE SADNESS OF BEAUTIFUL THINGS

In his latest collection, Van Booy (Father’s Day, 2016, etc.) examines the threads that tie people together. Such threads take different forms: a meaningful blanket, a fateful ride, an anonymous gift. In “The Pigeon,” a man shares a meal with his would-be mugger. In “The Saddest Case of True Love,” a postcard reminds a man of a chance encounter years earlier. Many stories in the book feel thin. “The Pigeon” is more scene than story. “The Hitchhiker” takes a similar structure and feels similarly underdeveloped. On the other end of the spectrum is “Not Dying,” a standout. There, Lenny tries desperately to protect his wife and daughter even as he loses his grip on the world around him. He contemplates the likelihood of a pending apocalypse and ends up arriving at some profound insights. Death, not love, is “the forever part,” he thinks. “Love was just something tiny and bright with eternity on all sides.” Van Booy points out twice that these stories are based on real people's lives: first in the preface and, later, with more specifics, in an author’s note to “Not Dying.” The purpose of these gestures is unclear; they don't add dimension to the flat characters, and the more dynamic characters, like Lenny, feel real enough as is. In any case, one of the book’s eight stories could not have been based too closely on reality. “Playing with Dolls” is the sole foray into science fiction and future technologies. While it shares some similar themes with the other stories, it makes for an odd fit.

A slim collection featuring tales of loneliness and longing based, largely, on real people.