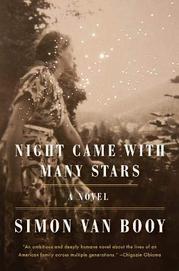 NIGHT CAME WITH MANY STARS

Misfortunes and strokes of luck recur within a family over the course of generations, and sometimes, the universe connives to make the connecting thread hard to follow.

Drawing on themes from children's literature, Shakespeare, and T.S. Eliot, Van Booy traces the circular paths through time followed by one family in a series of moody—probably black-and-white—snapshots. As an uneducated young teen in impoverished 1930s rural Kentucky, Carol lives a life of privation and meanness with her widowed father. Escape of a sort comes when she is wagered away to her father’s poker buddy. But harm continues to accrue to Carol in countless brutal ways until her rescue by a trio of “outsiders.” Van Booy’s often poetic yet spare recounting of the events set in motion after Carol’s relinquishment covers the course of three generations in Carol’s family with nods to contemporary trends as well as an acknowledgement of the inevitability of the seasons of a lifetime. Cycles of racism, violence, and misogyny are disrupted by the grace-filled actions of friends, relatives, and strangers all making their ways through the same inhospitable environment. In the words of one of Carol’s unlikely saviors, everyone reaches a crossroads in life, where they can choose to take another way. The same sage observes that what you give in the world will be returned and what you take will be taken; these lessons, shared with Carol on a miserable ride to redemption, inform just about every action and interaction between and among the myriad characters Van Booy sets loose on the slowly revolving stage of rural, karmic destiny.

This well-crafted and often serendipitous saga recognizes that family cannot be escaped but can be expanded.