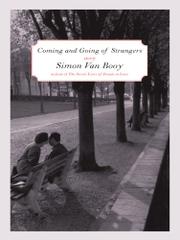 Couples find surprising, if not downright strange ways to come together in a second romance-centered collection by Van Booy (The Secret Lives of People in Love, 2007).

The author has a pitch-perfect tone for writing about the tender passion. Instead of florid, melodramatic prose, the five tales feature hushed, patient storytelling that’s deliberately abstracted; Van Booy’s goal is to capture the ineffable nature of falling in love. The title story is a braided narrative involving Bruno, a famous concert cellist prone to musing on the death of his sister years ago, and Hannah, who similarly mourns the untimely loss of her young brother. Restrained without being icy, it recalls a Bergman film as it returns to such curious, ghostly characters as the nun Bruno sees writing on a frosted window, or the homeless man Hannah watches in a Los Angeles park. Van Booy has a taste for merging such gentle imagery with more violent moments, as when Hannah’s father chops off his hand after the death of his son. “The Coming and Going of Strangers” opens with a gypsy man risking his life to save a child from drowning. Two decades later, the man’s son seems to have inherited his father’s nobility, which helps readers understand that he’s more than a Peeping Tom as he obsessively spies on the girl he adores. Van Booy’s gauzy characterizations can be maddening: Is the narrator of “Tiger, Tiger” unhealthily fixated on a pediatrician who had an affair with her mother-in-law, or is he truly amazingly wise, as she seems to believe? In this particular universe, emotion counts for more than motivation, so the hero of “The City of Windy Trees” doesn’t seem especially odd for being so absurdly concerned with Raisinets and David Bowie songs. His journey from New York to Sweden to meet his daughter comes to such a sweet, sensible resolution that it convincingly shows how love rights the world.

Appealing and surprising takes on a subject prone to cliché.