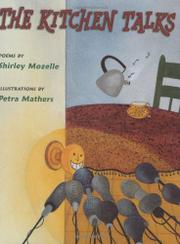 The inanimate denizens of the kitchen nab the limelight in this somewhat uneven, amusingly illustrated collection of 20 short poems. Much of the verse employs personification—the refrigerator, pot holder and rolling pin drolly narrate their own poems. In others, the narrative voice becomes oddly anonymous, as in the two-line poem “Freezer”: “Cold as ice / But no goose bumps.” Tired initial simile aside, the question of goose bumps seems an odd introduction in a collection focused on objects. Mathers’s light touch redeems this same double spread with a funny, sneak-peek interior: A fish juggles lima beans atop a carton of strawberry ice cream, near a box of “Hungry Dude” pizza. Some poems stand out for their playful metaphors and puns: “Toaster” is “Jack-in-the-box / For bread”; “Paper Towels” enjoins “ . . . Don’t stop me now—I’m on a roll.” Mozelle brings the precision demanded by the short form to many, but not all, of these poems. Mathers’s cheerfully quirky watercolors notwithstanding, this collection neither falls flat nor rises above. (Poetry. 4-8)