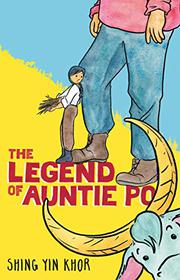 THE LEGEND OF AUNTIE PO

In a late-19th-century Sierra Nevada logging camp, a Chinese American girl spins tall tales and dreams of a better future.

Mei helps her father in the kitchen, feeding the dozens of hungry men who work at their logging camp. At night, she entertains listeners with her made-up stories about Auntie Po, an elderly Chinese woman taller than the pine trees who has a blue water buffalo. In these stories clearly inspired by Paul Bunyan, Auntie Po is a guardian figure, protecting the logging crew from threats including giant mosquitos and unscrupulous companies. But in the real world, anti-Chinese sentiments have turned into acts of violence. When the logging company caves under a boycott, the White camp boss dismisses all the Chinese workers, leaving frustrated Mei angry at her own helplessness. Nuanced portrayals of characters’ relationships keep the themes of discrimination and allyship in focus; the tenuous friendship between Mei’s father and the camp boss in particular highlights the difference between offering verbal support and taking meaningful action. The clean, expressive linework and muted watercolors portray both the dangerous realities of logging and quiet, emotional moments with equal effectiveness. In a sweet, naturally inserted subplot, Mei, who wears trousers rather than dresses, says she is not interested in boys and is clearly enamored of her closest White female friend.

A timely and ultimately hopeful tale.