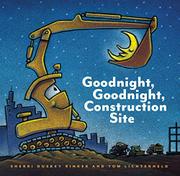 From the Construction Site series

A group of construction vehicles put themselves to bed.

Rhyming couplets set the scene (“The sun has set, the work is done; / It’s time for trucks to end their fun”) and then describe their bedtime routines, truck by truck. The crane sets one last beam before settling in, a star-shaped nightlight suspended from his lowered mast and a teddy bear clutched in his stabilizing arms. The cement mixer is hosed down before giving into slumber beneath a much-too-small polka-dot blanket. The dump truck deposits one last load before conking out next to heaps of rubble. As depicted by Lichtenheld, the trucks all have googly windshield eyes and grins that more or less correspond to grilles. They look a lot like Disney Pixar’s Cars, but there are only so many ways to anthropomorphize a truck. He exerts his artistry in other ways; the dump truck’s snores, depicted as a rising stream of ever larger Z’s, float into the night, becoming part of the steel framework of the building under construction. Rinker’s verse does not always scan well, but it is rhythmic enough to carry readers along. It is a real shame that not a single one of these muscular vehicles is female; this employer is clearly not interested in equal opportunity.

Who cares? The equation of trucks + bedtime book = best-seller, even if it does set feminism back a few decades.