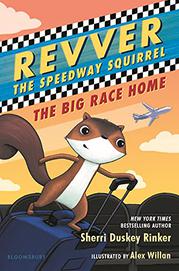 From the Revver the Speedway Squirrel series, volume 2

A race car–loving squirrel learns to temper his impulsive streak.

Following 2020’s Revver the Speedway Squirrel, readers are reunited with Revver, the pit crew squirrel. He loves the action and bustle of the racetrack and all the busyness that surrounds it, but he especially loves his human friends, Bill and Joe. When the race team moves circuits, though, Revver has a tough time exercising patience, causing a few catastrophic crashes and then missing his flight with the team. Separated from his humans, he must rely on the goodness of others to help him find his way back to them. Faced with a perilous journey during which he hikes along a treacherous highway, stows away on a crowded train, and encounters a conniving cat, can Revver reunite with his people before the next big race? Rinker’s tale is filled with abundant squirrel cuteness and a smattering of giggle-inducing poop and puke scenes but falls somewhat flat, mired in its own didacticism with its heavy-handed insistence on patience and kindness. Revver’s observations of the world come across as mundane, favoring telling over showing. The text utilizes a plethora of stylistic conventions—words in all caps, bold emphases, italics, and different fonts—which combined may prove too distracting and might have worked better in a shorter-form chapter book. Human characters are presumed White.