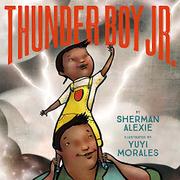 The Native American boy is named after his father, whose nickname is Big Thunder. Thunder Boy Jr. says his nickname, Little Thunder, makes him "sound like a burp or a fart." Little Thunder loves his dad, but he longs for a name that celebrates something special about him alone. He muses, “I love playing in the dirt, so maybe my name should be Mud in His Ears.…I love powwow dancing. I’m a grass dancer. So maybe my name should be Drums, Drums, and More Drums!” Little Thunder wonders how he can express these feelings to his towering father. However, he need not worry. Big Thunder knows that the time has come for his son to receive a new name, one as vibrant as his blossoming personality. Morales’ animated mixed-media illustrations, reminiscent of her Pura Belpré Award–winning work in Niño Wrestles the World (2013), masterfully use color and perspective to help readers see the world from Little Thunder’s point of view. His admiration of his dad is manifest in depictions of Big Thunder as a gentle giant of a man. The otherwise-muted palette bursts with color as Thunder Boy Jr. proudly enumerates the unique qualities and experiences that could inspire his new name.

An expertly crafted, soulful, and humorous work that tenderly explores identity, culture, and the bond between father and son.