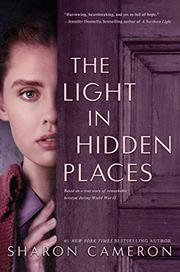 THE LIGHT IN HIDDEN PLACES

A true story of faith, love, and heroism.

Stefania “Fusia” Podgórska longed for nothing more than to leave the rural Polish farm she was born on for the city of Przemyśl where her older sisters lived. At the age of 12, she did just that, finding a job with the Diamants, a family of Jewish shopkeepers who welcomed her into their lives. For three years they lived peacefully until the Germans dropped bombs on Przemyśl. The family struggled on as the war and anti-Semitism ramped up, but eventually, the Diamants were forced into a ghetto. Then 17, Catholic Fusia was determined to help them survive, even at the risk of her own safety, while also caring for her 6-year-old sister, Helena, after their family was taken by the Nazis for forced labor. Knowing the risks involved, Fusia made a bold decision to harbor Jews. As the number of people she sheltered increased, so did her panic about being caught, but she was determined to do what was right. Cameron (The Knowing, 2017, etc.) used Stefania’s unpublished memoir as well as interviews with family members as source material. She deftly details Fusia’s brave actions and includes moving family photographs in the author’s note. Narrated in the first person, the story highlights essential events in Fusia’s life while maintaining a consistent pace. Readers will be pulled in by the compelling opening and stay for the emotional journey.