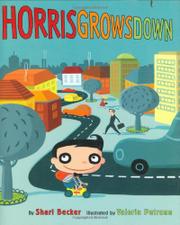 Echoing—at least thematically—the Bob Dylan lyric, “I was so much older then / I’m younger than that now,” this tale pitches a vastly oversized four-year-old in to, then out of, the adult world. Unable to think of anything else to do with him, Horris’s parents send their towering son out to get a job. His career as a box-sorter is cut short, however, when the boss discovers that he can’t count above ten. Fortunately, on the way home, he falls in with some children who sell him on the idea of flextime play periods and free snacks on demand. In digitally rendered, Dan Yaccarino–style scenes, Petrone gives Horris a giant head with raccoon eyes and a solid-looking cowlick, and sets him in a retro-flavored suburban neighborhood. Along with some disagreement between text and pictures (Horris sorts three colors of boxes, but only two are visible, for instance), the episode ends with the rather belated notion that, hey, Horris could go to school to pick up that missing job skill. It’s difficult to see the audience for this; young Baby Hueys will derive more comfort from Gennifer Choldenko’s How to Make Friends with a Giant (2006). (Picture book. 5-8)