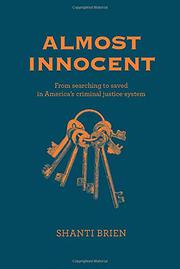 From Searching to Saved in America's Criminal Justice System

A lawyer’s memoir draws connections between her cases and her family’s involvement with the law.

Brien weaves together her personal story, including a somewhat dysfunctional childhood, marriage to an NFL player, and motherhood, with tales from her work as a criminal defense lawyer and the saga of her family’s involvement in a federal mortgage fraud case. Brien, whose work involves appeals by people already convicted of crimes, recounts the stories of clients whose actual guilt or innocence is less important than the fact that they have been ill-served by the justice system, facing bias, mandatory minimum sentencing, inadequate representation, and unsympathetic officials. Those stories are interspersed with Brien’s personal history. She was raised primarily by her White mother; her Muscogee father’s undiagnosed depression made him an unstable presence. After difficult teenage years, she attended Berkeley and Stanford universities. She married a Berkeley classmate whose football career led to several cross-country moves—and the experience of seeing her husband under investigation following a business associate’s fraudulent activities. Brien finds parallels between her clients’ experiences and her own, drawing lessons from them while remaining aware of the privilege that makes her family’s encounter with the law a very different experience. Brien, a strong writer, is particularly skilled at explaining the procedural minutiae that form the basis of her work without overwhelming the reader with legalese. She also excels at revealing her clients’ humanity as she shares their stories. She is remarkably open in describing her relationship with her “hippie football-playing feminist frat guy” husband and the challenges they faced balancing their careers while raising small children. Brien ably explains how she maintains a fundamental belief in the legal system while directly confronting its many shortcomings, appreciating each of the rare wins she accomplishes on behalf of a client. The result is a compelling, thought-provoking work that shies away from easy answers to questions of right and wrong or guilt and innocence.

An intriguing, informed examination of the justice system from a professional and personal perspective.