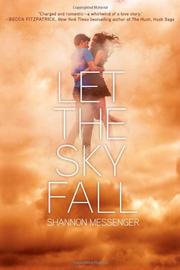 From the Sky Fall series, volume 1

A teenage boy discovers his magical heritage and falls in love with his protector.

Vane Weston has no memories of his life before a tornado killed his parents, only dreams haunted by a beautiful girl. Audra’s been following Vane as his assigned protector from the Gale Force. Although Vane has no memory of it, he is an air elemental, or sylph, just like Audra—in fact, he is the key piece in a war against the stock villain, a power-hungry sylph tyrant who murdered Vane’s parents. Doing her duties, Audra accidentally reveals their location—in much the same way that, years ago, she unintentionally alerted enemy soldiers, called Stormers, to Audra’s parents’ location as they served as guardians for Vane’s family. This prior accident ended in numerous casualties. Vane must awaken to his heritage and powers, mastering the languages of the four winds (one for each direction), if they are to stand a chance when the Stormers come for them. Audra has only days to train him, adding temporal tension. Chapters alternate first-person narration between Vane and Audra, with Audra’s redemptive arc adding meat to the orphan-hero-discovering-his-magical-heritage storyline. While some early exposition is clunky, once the story settles into a character-driven rhythm, the prose smooths out considerably. The twists at the end are refreshing rather than cheap.

Characterization elevates this romance over similar offerings in a crowded genre.