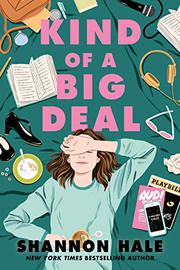 KIND OF A BIG DEAL

After dropping out of high school to chase her dream of Broadway stardom, 18-year-old Josie has landed in Montana with frayed relationships, a bruised ego, and a nanny job.

Encouraged by her overly supportive teacher and thus confident that she will nail the New York City audition he arranged, Josie is too embarrassed to return home to Arizona when she fails to even get a callback. While fruitlessly pursuing other auditions, Josie racks up credit card debt until she gets a job nannying 5-year-old Mia. Josie bonds with Mia, accompanying the child and her newly divorced mother upon their relocation to Missoula. Once there, Josie struggles to make friends; break into community theater; and remain connected to her distant boyfriend, Justin, and her best friend, Nina (a trans woman who is immersed in college life). A casual gift of eyeglasses from a bookseller changes the plot trajectory in a surprising way: Josie realizes that the spectacles allow her to drop straight into—and then influence—the narrative of any book she chooses. So commences a series of adventures in which Josie discovers hard truths about her motivations and relationships. The pace is swift except for some of the longer books within the book, which can drag. Observant readers will appreciate the clever puns and turns of phrase as well as the deeper meanings of some characters' names. Rich musical theater content will delight fans of that genre. Most characters are White.

An unusual journey of self-discovery.