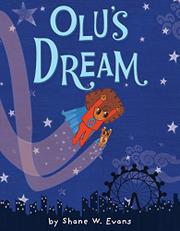 Curly-haired Olu would rather play than sleep, but when Dad and Mom turn off the lights, the vivacious tyke embarks on a series of fantastical dreams. With teddy-bear sidekick in tow, Olu’s imagination pours forth in stream-of-consciousness style as he encounters monsters, rides a whale and races through space. In one hilarious spread, the two buddies gorge on pizza and honey, eyes closed in a delicious delirium. Lying on the ground, their muffin-top bellies cause fissures in the floor with their heaving weight. Upon waking, Olu recounts his adventures to his father, who explains that the imagination “never stops” and that one can “dream during the day / and use that imagination whenever you play.” The anime-influenced illustrations depict the spunky protagonist as a wide-eyed, cute-as-a-button child of mixed-race descent. Evans uses collage with multiple textured layers, the graphic shapes reinforced with thick pencil work. While the simple rhyming text of successive couplets is regrettably inelegant, this is a pleasant story that encourages readers to use their creative capacities. (Picture book. 3-7)