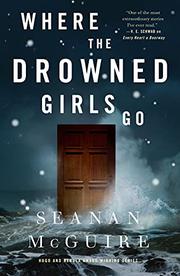 WHERE THE DROWNED GIRLS GO

In the seventh Wayward Children tale, students plan to escape from a brutal institution designed to crush the magic out of them.

Cora, a strong swimmer constantly tormented by her peers for her weight, went through an underwater door to the Trenches, a magical undersea world where she was a mermaid and a hero, valued for her bulk and her strength. But a whirlpool spat her out again into our world, leaving her bereft. Eleanor West’s Home for Wayward Children brought her among other young people who had traveled through a door and returned here, often unwillingly. Cora then passed through another door leading to the creepy world of the Moors, where the sinister Drowned Gods claimed her for their own. Even back at the school, Cora can’t block out their voices or deny their marks on her skin, so she makes the desperate choice to switch to the Whitethorn Institute, which, rather than helping children while they wait for their doors to reappear, encourages them to reject their magical pasts and accept this world as home. Sadly, Cora almost immediately understands that Whitethorn’s philosophy is less about giving its students the strength to move on with their lives and more about breaking their spirits and ruthlessly molding them into a miserable conformity. But dropping out isn’t an option the school offers, and Cora and her friends realize that Whitethorn has more than mundane means at its disposal to keep them there. McGuire’s themes—let people be themselves and don’t treat being fat as some kind of moral failing or physical issue that’s easily addressed—won’t surprise readers of this series and her other works, but her usual arguments remain sound, and she tells a good story. There are also some deeply chilling moments in the experiences of the other students, particularly in the case of a girl cursed by the Rat King to shrink into a nameless rat.

A journey into familiar territory with a skilled guide; but here’s hoping that future trips head into the unknown.