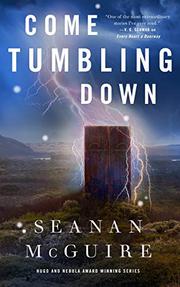 From the Wayward Children series, volume 5

The ghoulishly dysfunctional Wolcott twins—mad scientist Jack and her sister, Jill, who aspires to be a vampire—return for the fifth Wayward Children novel (In an Absent Dream, 2019, etc.).

Through a door etched by lightning, Jack reappears at Eleanor West’s Home for Wayward Children, a refuge for those children who found a portal to one of many magical worlds but couldn’t cope when they wound up back on Earth again. Jack isn’t quite who she was when she first left; she’s presently stuck in the resurrected body of Jill, whom Jack had previously killed in order to put an end to Jill’s targeted slaughter campaign at the school. Meanwhile, Jill's mind inhabits Jack's still-living flesh, thanks to a coerced body-swap instigated by Jill's vampire master. This state of affairs is distressing for two main reasons: 1. Jack has obsessive-compulsive disorder, which manifests in a pathological fear of being dirty, physically and mentally, and can’t be comfortable in Jill’s mass-murdering body, and 2. The resurrected can’t become vampires, so Jill plans to use her sister’s more vital body for that purpose. Accompanied by her twice-resurrected lover, Alexis, and several students, Jack goes home to her beloved world of the Moors, a blood-tinged and gothically gloomy mashup of Stoker, Shelley, and Lovecraft, to confront her narcissistic, body-stealing twin while her schoolmates must dodge the Moors’ deadly traps and haunting temptations. McGuire (Middlegame, 2019, etc.) specializes in lending equal richness to her worldbuilding and her characterizations; these are real people dumped into fantastical situations. In this novel, she examines the thin line separating heroes from monsters—and then blurs that line completely. As in the other series installments, she also argues that one’s real or perceived flaws can prove to be a source of strength despite, or even because of, the pain they cause to oneself and others.