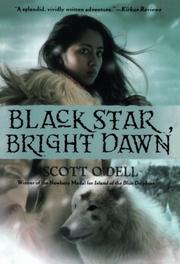 When her father's injuries force him to drop out of the annual dog-sled race from Anchorage to Nome—the 1179-mile Iditarod—Bright Dawn takes his place. Bright Dawn (18) hunts with her father till an experience adrift on an ice floe makes him so fearful that his family moves inland to Ikuma, a checkpoint on the Iditarod. There. as a gifted dog-handler, he is drafted for the great race; and sponsors agree, out of need, to accept his daughter as his substitute—she has been helping him train and has a special relationship with Black Star, the independent-minded lead dog. At Anchorage, Bright Dawn is befriended by Oteg, an experienced racer whose nine daughters spurn his advice—Bright Dawn agrees to accept at least some of it. The narrative focuses on their race together—the strategy of holding back at the onset and of timing rest periods, building igloos, helping other competitors; the dangers come from the rough, frigid terrain and encounters with wolves and moose, so that (at least for these participants) cooperation for survival comes to outweigh the race itself. Still, by taking some of Otek's advice, balanced by Black Star's instincts and her own sense, Bright Dawn is running first at a crucial point; and though she comes far from winning, her moral victory is satisfying. O'Dell's focus on Bright Dawn intensifies the drama of her struggle against the wilderness and its lesson in self-reliance; it may also leave readers wondering how different the other racers' experiences might be. As she returns to her own father, even Otek vanishes—where did he place? Still, readers will share a splendid, vividly written adventure with Bright Dawn; perhaps that is enough.