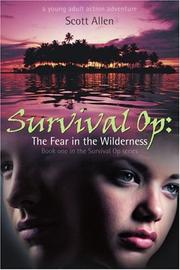 The Fear in the Wilderness

An intensely readable yet alarmingly violent cross between TV shows Lost and Survivor.

In book one of this series, Marcus, a runaway, is kidnapped and taken to an island in the Bermuda Triangle where a government-sponsored experiment is supposedly under way to measure how bodies react to extreme pressures in a hostile environment. Wounded 13-year-old Lynn is also trapped in the frightening wilderness surrounded by electrified fences. The teens are told they will be hunted and killed, but they adjust amazingly fast, finding water and shelter and creating weapons. When Lynn is apparently killed, Marcus becomes obsessed with vengeance and uses great ingenuity to murder many mysterious agents. He does capture one, however, who is willing to cooperate, and the two are helped by an unseen yet terrifying monster that remains one of the island’s greatest unexplained mysteries. The strange island, hostiles, traps, dangerous boars and experimenting on humans are all reminiscent of Lost; the need for companionship, shelter, food and weapons remind one of Survivor. A few details detract from the storyline throughout, such as whether the captured agent would so quickly become an ally or that Marcus would know how to build grenades and bombs so easily. Abrupt shifts between first and third person are also quite jarring. Despite these pitfalls, readers will root for Marcus and his crew to prevail over the sinister Survival Op staff, and the story concludes with plenty of plot threads to explore in further editions.