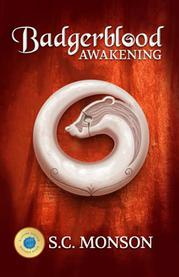 The tale of a tyrant king, a princess, and a young man whose dormant powers may change the course of history.

In the kingdom of Perabon, Kor is a young forester who lives with his foster father, Peter, a woodsman who found Kor as a youngling missing most of his memories. Kor, Peter, and their trained pet badger, Spart, share a secluded and peaceful life, but Kor has a price on his head for tax evasion and murder (although there is a very good explanation for the latter). From his previous life, whatever that was, Kor retains only an old bone pendant, frequent nightmares, and a voice that tells him, “Remember your blood, remember me.” Lady Allinor of Tilldor finds herself in trouble when she briefly leaves the palace on a dangerous trip into the forest to seek a rare flower. A beast attacks her, and Kor saves her life. Their entwining paths send the youths on a life-changing journey of discovery: Something looms under Kor’s skin alongside his unwanted memories, and Allinor’s inheritance comes with a side of mythical magic thought to be lost. Peter, Kor, and Allinor share the stage in Monson’s slow-moving but engaging YA fantasy. The first in a series, this quiet entry introduces a world of shifters and magic as it explores the ways old myths and lost stories affect the lives of the protagonists. Kor’s arc is the richest as he experiences the guilt and fear connected to the suppressed memories without realizing what it all means until very late in the novel. The plot itself is standard fantasy fare, but the cast is endearing, and the story is rather diverting: Who knew that badgers could be heroes too?