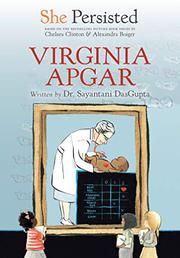 DasGupta, herself a physician, picks up her pen to add the story of pioneering female physician Virginia Apgar to the growing pantheon presented in the She Persisted series.

Though the name Apgar might be familiar to many adults, young audiences meeting her for the first time will find a worthy hero in these pages. Virginia was born in New Jersey in 1909 and was a go-getter from the very start. Her family was not wealthy, but education and curiosity were prized. Even though there were very few female physicians at the time, Virginia knew from a young age that she wanted to study medicine. From childhood and through her career, she gained a reputation as a “fast talker, fast thinker and fast mover” who would let nothing stand in her way. When sexism blocked her path to a career in surgery, she pivoted to the field of anesthesiology, where she would make her greatest impact in obstetrics, pioneering the infant health assessment that now bears her name. Drawing on primary sources and refraining from speculation while always being mindful of her chapter-book audience, DasGupta offers a biography that is just right for young readers eager for independence. Flint’s airy illustrations serve to illuminate the text in a charming style, depicting Apgar and most of her contemporaries as White. Tips on persistence and sources round out the book.

A fast-paced tale that will spark curiosity—Dr. Apgar would approve.