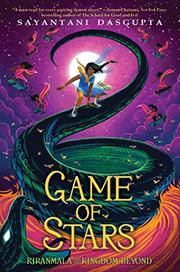 From the Kingdom Beyond series, volume 2

In this sequel to DasGupta’s middle-grade debut, The Serpent’s Secret (2018), readers learn that Parsippany, New Jersey, middle schooler Kiranmala has not returned to the Kingdom Beyond Seven Oceans and Thirteen Rivers for months.

In fact, none of the Indian-American’s friends from the Kingdom Beyond—especially princes Lalkamal and Neelkamal, their cousin Mati, and the bird Tuntuni—has contacted her since her departure. But after she is visited by the Rakkhoshi Queen under the cloak of night and prompted by an interdimensional television station to enter Who Wants to Be a Demon Slayer?, a multiverse reality game show, Kiranmala sets off to the Kingdom for another rollicking roller-coaster ride of an adventure, featuring a fork fight with a demon school dropout, an intergalactic auto-rikshaw ride, and a mind-boggling series of riddles with a ghost. In this outing DasGupta draws inspiration from American and South Asian pop culture in addition to Bengali folk and children’s literature, and an extensive author’s note provides readers with additional context for many of the cheeky references peppered throughout the book (the “Dead and Lovely” cream hawked in interdimensional TV ads is inspired by fairness creams that are ubiquitous on the Subcontinent, and “Samosa Drones” are a nod to Amazon’s suggestion that they might use drones for book deliveries). Kiran’s smart, funny voice will win new fans and gratify returning readers.

DasGupta once again wittily meshes Bengali folktales, intergalactic science, and a spectacular world of her own creation in a yarn that is part hero’s quest, part immigrant coming-of-age tale