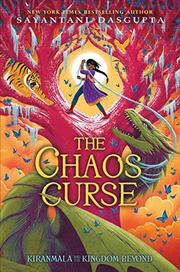 From the Kingdom Beyond series, volume 3

by Sayantani DasGupta ; illustrated by Vivienne To

In the third installment of DasGupta’s bestselling series, 12-year-old demon slayer Kiranmala and her friends must stop her father, the Serpent King, from collapsing the parallel dimensions of the multiverse into one in a nefarious plot to destroy its diversity.

Having saved Prince Neelkamal from her father at the end of Game of Stars (2019), Kiran must now save Prince Lalkamal, Neel’s brother, trapped in a New Jersey tree. But as Kiran traverses the multiverse, things get strange(r): When her auto-rickshaw collides with a pumpkin, the old woman who tumbles out turns from the woman from a well-loved folktale into the story’s ferocious tiger. The “story-smushing thing” keeps happening, and when a wormhole lands Kiran back in New Jersey, she returns to parents who are “colonized beyond repair”—they keep referring to her as “Karen” and rejecting her bicultural Bengali American identity. In line with its predecessors, this adventure is characteristically action-packed and funny: DasGupta riddles the text with in-jokes and puns, and her verbal gymnastics are wink-winks to readers who are fluent in Bengali or Hindi and/or familiar with South Asian culture. But this book is also the most ambitious of the trilogy. Not only does it draw inspiration from Bengali folklore, South Asian and American pop culture, and metaphysics, it also reinforces seamlessly and with righteousness the series’ central themes: that stories are powerful, and that many stories are necessary to imagine a just future.

An eminently satisfying closer to a thoughtful, complex, and very funny adventure series.