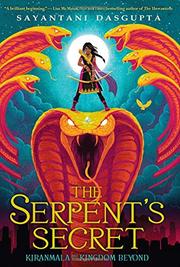 From the Kingdom Beyond series, volume 1

by Sayantani DasGupta ; illustrated by Vivienne To

It is not very often one comes across a fantasy novel for young readers in which the protagonist is both Indian and an interdimensional demon slayer.

Kiranmala is a regular sixth-grader in Parsippany, New Jersey, until her life is thrown out of whack when her parents are cast into another dimension as the result of an imploding spell. To make matters worse, a drooling rakkhosh slams into her kitchen, ready to eat her. Kiran leaves on a quest to save her parents; she’s accompanied by two handsome Indian princes—Lal and Neel—and their flying pakkhiraj horses. What follows is a roller-coaster adventure into The Kingdom Beyond the Seven Oceans and Thirteen Rivers, where Kiran and her friends seek help from a bird who enjoys bad jokes, flee from demon groupies, and face the formidable Serpent King. Writing in smart and likable Kiran’s first-person voice, DasGupta successfully blends together American popular culture, Bengali folk tales, and witty dialogue in her hilarious debut. (The banter among Kiran and the bickering Lal and Neel alone will have readers in stitches.) A refreshing take on the hero’s quest in which almost all the characters are Indian (or are of Indian origin), this series opener explores both the pains of growing up and what it means to be a second-generation Indian-American.

This original fantasy is laugh-out-loud funny and extremely engaging.