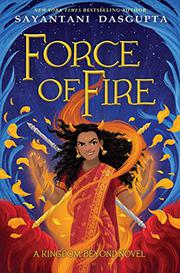 From the Kingdom Beyond series, volume 2

In a world where serpents have colonized humans and demon rakkhosh alike, fire rakkhoshi Pinki goes on a quest for belonging and freedom.

This follow-up to The Serpent’s Secret (2018) returns readers to the fantastical land of the Kingdom Beyond Seven Oceans and Thirteen Rivers. Despite being the daughter of legendary freedom fighters, Pinki is not sure she can identify with the rakkhosh resistance. She also doesn’t have any friends, something made worse by the fact that she cannot control her powers, sometimes wreaking havoc. When she accidentally sets fire to her school, a humiliated Pinki is persuaded by the evil serpent prince Sesha to steal moonbeams from the Moon Mother that he claims will power a superweapon and defeat the resistance. In exchange for this treachery, Sesha offers Pinki control over her powers. Pinki’s quest to help Sesha and control her own fire leads her to befriend several interesting people, including Moon Maiden Chandni. Ultimately, the reluctant heroine must decide where she belongs in her people’s fight for independence from the snakes. DasGupta’s carefully crafted characters are convincing, and the fast-paced narrative will keep readers thoroughly engaged. The novel draws inspiration from Bengali folktales, Hindu epics, and India’s fight for independence from the British; most importantly, it highlights the innate power of linguistic and cultural diversity and heritage.