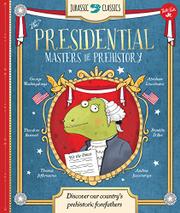 THE PRESIDENTIAL MASTERS OF PREHISTORY

From the Jurassic Classics series

Six presidents of our Holocene epoch pair up with prehistoric predecessors, from George Washingdonyx to Franklin D. Rex.

Following the format of The Prehistoric Masters of Literature (2016), Lacey matches a dino-bio that comes with an attached booklet containing further details to a profile of a historical chief executive from the (considerably) more recent past. Though millions of years separate the administrations of each couple, there are remarkable parallels: Thomas Jeffersaurus drafted a “Declaration of In-dino-pendence,” and Franklin D. Rex crafted a New Deal for those afflicted by the Great Ice Age. It’s a clever premise—but the author’s efforts to accentuate the positive for each president lead her into some troublesome territory. She trumpets Andrew Jaxceratops/Jackson’s “passion for democracy” while staying silent about his treatment of Native Americans, for instance, and makes no mention of slavery either until noting that (in an infelicitous choice of words) Abraham Lincolnator “freed millions of creatures.” The Winning of the West may not be the best choice to represent Theodore Rexevelt’s publications either, considering that work’s rabid cultural imperialism. For all that they’re uniformly green of skin, the dignitaries in Isik’s cartoon portraits generally resemble their modern white (mostly) counterparts, except in a gallery of additional proto-presidents where “Obamasaurus” has thick lips (wrong in more ways than one).

Chortleworthy at first glance, disturbingly superficial at second and subsequent ones.