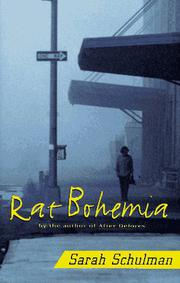 Poverty, AIDS, and alienation hobble the lives of the lesbian and gay protagonists of this Lower East Side novelan unusually insightful if sometimes self-indulgent tale of love lost, briefly gained, and lost again. Rita Weems works at New York City's Pest Control officea strange job considering the central role rats play in her worst nightmares. Her fear goes back to her life as a teenage runaway when, banished from her father's home after an affair with a female classmate, she spent her nights on Manhattan's West Street pier and watched swarms of the rodents frolic a few feet from her face. Now in her mid-30s, Rita still struggles to come to terms with her Jewish father's rejection and her mother's death when Rita was only ten. Her two closest friends are hardly better off: David, whose upper-middle-class family labors valiantly to pretend he's straight, is dying of AIDS; Killer barely survives by watering plants for $40 a week and renting her bed out to European tourists rather than ask her disapproving immigrant parents for a place to lay her head. As the three friends pass a New York summer roaming the streets for entertainment, they obsessively analyze their parents' lives in hopes of explaining away the pain of familial rejection. Still, they realize as David's death arrives and, as he had feared, passes almost unremarked among the death-weary gay population, understanding the reasons for abandonment fails to bring a sense of peace. Seeking solace in a new lover's arms, telling herself that her travails will make life easier for future lesbian and gay generations, Rita knows that nothing can erase ``that terrible night. When she came so close to getting what she needed, what every child deserves. Someone to be on her side. Someone to defend her.'' A bit overdramatic, perhapsbut Schulman (Empathy, 1992, etc.) artfully conveys her characters' particular sense of loss. (Author tour)