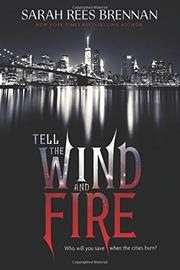 TELL THE WIND AND FIRE

“It was the best of times until it was the worst of times” in a fantastical Tale of Two Cities.

In Light New York, Light magic provides luxurious ease for its practitioners, but the symbiotic Dark magic provokes ostracism and confinement. Lucie Manette escaped Dark New York as a heroine after rescuing her father from imprisonment, but she remains guilt-ridden over those she left behind. When Carwyn, a doppelgänger created with illegal Dark magic, unexpectedly saves his double, Ethan (Lucie’s beloved and nephew of the Light Council’s leader), Lucie is sickened by the exposed corruption among the ruling caste. But as the downtrodden Dark populace rises in bloody revolution, Lucie has to make a terrible choice. Retellings of beloved classics are tricky, but here, Dickens’ overall plot and major characters translate effortlessly into this intriguingly imagined setting. Lucie and Ethan are more complex than their rather insipid Victorian prototypes, and Carwyn retains all the bad-boy fascination of his charismatic counterpart. Less successful are the direct quotes from the original, which feel strained and artificial. Brennan is best where she is most original: her metaphorically rich magical system, her timely (and timeless) championing of society’s outcasts. Her trademark witty dialogue—although restrained by the somber narrative—still sparkles, making the inevitable tragic conclusion all the more poignant.

This respectful and occasionally clever homage may be most appreciated by those least familiar with the original.