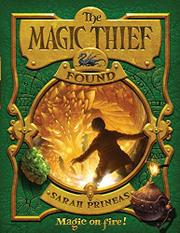 The wild magical menace barely fended off in Magic Thief: Lost (2009) is headed for the town of Wellmet, and only the guttersnipe-turned–wizard’s apprentice Connwaer and his gruff master, Nevery Flinglas, realize the danger. Having sacrificed his “locus magicalicus,” Conn’s first priority is finding a replacement—meaning concocting a finding spell that (as usual) results in spectacularly destructive pyrotechnics and the sudden necessity of a long and dangerous journey. Narrator Conn continues to be one of the most deliciously infuriating protagonists ever, so focused on saving his beloved city that he ignores such hazards as the sentence of exile its annoyed leaders impose on him and more distracted than upset when a supposedly extinct dragon snatches him away. Once again Prineas dishes up a nimble plot laced with explosions and large-scale magic-working, enhanced by Caparo’s spot-art portraits, punctuated with brief letters or journal entries and capped with a section of capsule bios and recipes. The author brings the story to a strong close, too—but, good news, she has admitted in an interview to considering further sequels. (Fantasy. 11-13)