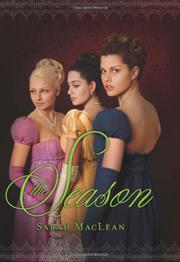 Jane Austen meets Trixie Belden. Lady Alexandra Stoddard is an anachronism—a feisty, outspoken feminist in Regency England. But the 17-year-old’s impassioned resistance to courtship and marriage rings false from page 23, with the introduction of the ploddingly obvious object of her reluctant but inevitable affections, her brothers’ best friend Gavin Sewell, the Earl of Blackmoor. Alex’s insatiable curiosity further complicates her relationship with Gavin; suspecting that he’s in danger, she’s determined to solve the puzzle of his father’s recent suspicious death, despite Gavin’s objections. Formulaic plotting, repetitive phrasing and scant development of supporting characters, such as Alex’s rival Penelope, weaken the story. But the novel is grounded in both historical context (Napoleon’s escape from Elba and the anonymous publication of Austen’s novels) and historical detail (ball gowns and the rigors of etiquette), which set the scene convincingly. MacLean’s lively characters, however improbable, provide a fun and unrestrained take on a buttoned-up era, and readers who choose to give themselves up to the tale will enjoy it. (Mystery/historical fiction. 12 & up)