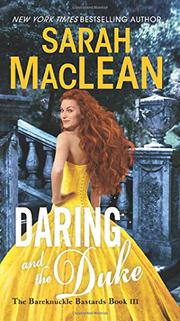 DARING AND THE DUKE

From the Bareknuckle Bastards series, volume 3

Twenty years ago, Grace Condry was betrayed by Ewan, the boy she loved. He went on to become the Duke of Marwick while she became the queen of Covent Garden, a dark corner of London where she runs a club that specializes in women’s pleasure. Ewan spent years searching for his love, and when he thought she was dead, he went mad with grief. When he discovers she’s alive, hope blooms, and he’ll do anything to be reunited with her. Grace wants vengeance because Ewan broke her heart and hurt those she holds dear, but when she’s finally face to face with him, she feels immense desire. Although they are different people than they were as children, attraction still simmers. Perhaps love could turn their fantasies into reality despite all the terrible memories between them. Visceral, gritty, and full of passion and angst, this romance mixes moments of emotional introspection with grand scenes of balls, fights, and, of course, scorching intimacy. Grace and Ewan had traumatic pasts, and now they are both discovering who they are in the present and who they could be together. While this story excels as a second-chance, redemption love story, what really makes it stand out is the unabashedly feminist exploration of power and how it ties in with identity and desire. The cinematic finale draws the series to a wholly satisfying conclusion.