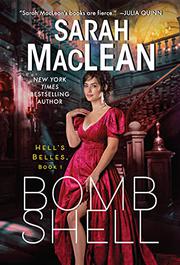 From the Hell's Belles series, volume 1

Thirty years old and single, Lady Sesily Talbot is no wallflower. Nicknamed “Sexily,” she's known for being scandalous—and she knows how to keep a secret. Two years ago, heartbroken after having been rejected by American businessman Caleb Calhoun, Sesily was approached by the Duchess of Trevescan with a life-changing proposition. She joined a group of women collected by the Duchess who use their skills to take down evil men. Something between fixers and vigilantes, these ass-kicking women—besides the Duchess and Sesily, there are Imogen, "who came with an expertise in things both extremely useful and extremely dangerous," and Adelaide, "whose meek exterior made her a superior thief"—are fearless and are also great friends to each other. Caleb spent most of the past two years across the Atlantic, but now he’s back in London. He’s always been irresistibly drawn to Sesily, and right away he knows she’s up to something. He has his own secrets to keep, though, which preclude him from pursuing a future with her. As they protect each other in dangerous situations, their secrets unravel and passion ensues. This book is a complete pleasure as it seamlessly shifts from nail-biting action to aching romance. It’s a celebration of finding joy through living and loving with truth and authenticity. The characters are rich and complex, and the pining between Sesily and Caleb is top-notch. MacLean fans will be thrilled with this much-anticipated pairing and eat up the cameos by characters from earlier books.

Another stunner from a Romancelandia favorite.