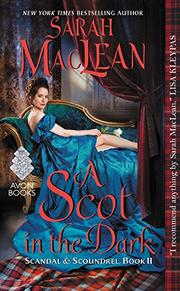 A SCOT IN THE DARK

From the Scandal and Scoundrel series, volume 2

When a duke’s forgotten ward embroils herself in a scandal, the duke decides to deal with her himself. That’s easier said than done.

Alec Stuart is a “proud Scotsman and unwilling twenty-first Duke of Warnick,” having inherited the title unexpectedly after a long series of dukes died without issue. He prefers to avoid the aristocracy, staying in Scotland to tend his whiskey distillery and his lands, which is how it escapes his notice that he has inherited a spirited young ward along with the title. Alec doesn’t even know Miss Lillian Hargrove exists until his solicitor informs him that Miss Hargrove has gotten herself thoroughly ruined. When Alec arrives in London, the situation is worse than he thought. Out of sheer loneliness, Lily let herself be taken in by a conceited artist, who's promised to unveil a nude portrait of her in 10 days’ time. The ton is all agog, and Alec must call on friends to help him find an emergency husband for Lily before the painting is unveiled. He doesn’t think anyone is good enough for the beautiful Lily, not even himself. MacLean’s (The Rogue Not Taken, 2015, etc.) signature humor and ingenuity are in evidence throughout this novel, the second in her Scandal and Scoundrel series—such as the 17 dukes who die within a fortnight, causing Alec to inherit the title. She writes love scenes and romantic dialogue with audacity, which sometimes leads her to overwrite a bit, as when she paints Lily’s erstwhile lover as a ridiculously arrogant popinjay who is somehow a talented painter, a gifted actor, and the owner of a theater company—all while partying every night with the English nobility. Even with a few outrageous characters and a far-fetched plot, this novel is so enjoyable that the author can be forgiven for overdoing it here and there.