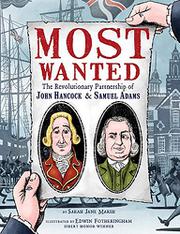 The story of the partnership and unlikely friendship between Samuel Adams and John Hancock.

In a punchy prose style and with rich historical detail, Marsh emphasizes the differences between the rabble-rousers. Wealthy Hancock, owner of ships and warehouses, “lived in a mansion with fifty-four windows high above Boston.” He was most interested in parties, fine wine, and looking his best in the latest fashions while being pulled around town in his golden carriage. Adams owned little, went about shabbily dressed, and was outspoken about politics. The Stamp Act prompted Hancock’s political awakening. Seeing an opportunity to recruit Boston’s wealthiest and most visible citizen to the cause of liberty, Adams invited Hancock to join in a peaceful boycott of British goods, the beginning of their powerful partnership. Fotheringham’s distinctive art depicts Adams as serious and surly and Hancock as dashing and arrogant. Most characters are white. A notable double-page spread depicts Hancock’s enslaved black house servant responding with an expression of disgust at the irony of Hancock’s words: “I will not be a slave. I have a right to the liberties and privileges of the English constitution.” In her author’s note, Marsh notes that Hancock owned enslaved people and that the phrase “all men are created equal” excluded equality for women and nonwhite people.

A lively, insightful look at the origins of the American Revolution.