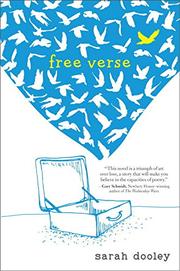 A troubled teen discovers the therapeutic balm of verse.

In a backwoods West Virginia mining town beset by poverty and environmental hazards, 13-year-old narrator Sasha Harless finds herself reeling from the loss of her guardian brother, Michael, whose recent death magnifies the sense of abandonment she first encountered at age 5, when her mother left them, and again at 8, after their father was killed in a mining accident. Michael’s death places Sasha under the protection of a kindly foster mother, who attempts to provide stability, but Sasha suffers from anxiety and violent outbursts when overcome by disturbing emotions, especially when grief “blows through me like a cold wind, thundering for me to go, to get out, to move.” Sasha acts out at school and runs away repeatedly, taking a beloved cousin with her once with sobering consequences. Sasha remains intent on leaving town until she’s exposed to poetry in English class and begins to find “something about the shortness of haiku feels good.” Dooley cleverly weaves into her novel different verse forms, which Sasha attempts for a poetry club she joins, giving her protagonist poet some creative focus, the freedom to experiment with self-expression, and the courage to stay put long enough to let the strength of her emotions settle inside.

Dooley winningly combines engaging plot twists and rich character development with the introspective and thematic power of poetry: not to be missed.