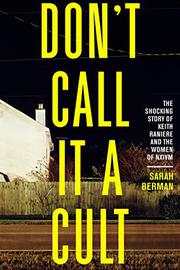 DON'T CALL IT A CULT

The Shocking Story of Keith Raniere and the Women of NXIVM

How a treacherous cult amassed a following under the guise of self-improvement.

Vancouver-based investigative journalist Berman front-loads her startling, comprehensive exposé on the NXIVM group with key information on how the association became popular yet remained elusive to law enforcement. She shares interview material from several members of a large cast of characters, including Clare and Sara Bronfman, heirs to the Seagram’s fortune who funded the organization for years (Clare is currently in prison). Berman tracks NXIVM “Vanguard” Keith Raniere’s history as an Amway distributor–turned–pyramid-sales executive. In the 1980s, he joined forces with former nurse Nancy Salzman (known as “Prefect”), and the duo promoted training and coaching programs geared toward women’s empowerment. Using a philosophical playbook influenced by Scientology and other similar groups, NXIVM began amassing members, each of whom was charged with recruiting others via classes called “intensives.” Bankrolled by the Bronfman sisters, who were cunningly exploited for their exorbitant wealth and strained familial relationships, the increasingly “dangerous mafia-like” society steamrolled its way into the lives of vulnerable, unsuspecting people, employing blackmail, extortion, forced confinement, and even sex trafficking. Raniere then created offshoots like the particularly insidious Dominus Obsequious Sororium. “By the time of his arrest,” writes Berman about DOS, “at least 102 women had been initiated into Raniere’s secret society. Not all of them had been branded, and not all of them had been coerced into sex, but court records and testimony would show that he considered all of them to be his slaves.” Not for the easily rattled, the author’s engrossing reportage meticulously reveals the tumultuous rise and fall of NXIVM after numerous criminal indictments and prosecutions. The author incorporates critical narratives from former members, laying bare their awful experiences. Her research, which eventually caused her to fear for her own personal safety, informs a vital cautionary tale about how “power, consent, and women’s agency” can be weaponized. File this alongside Lawrence Wright’s Going Clear and Jeff Guinn’s The Road to Jonestown.

An incendiary, serpentine report on criminal manipulation of staggering proportions.