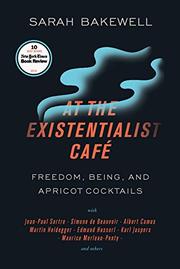 AT THE EXISTENTIALIST CAFÉ

Days in the lives of influential philosophers.

In this brisk and perceptive intellectual history, Bakewell (Masters of Studies in Creative Writing/Kellogg Coll., Univ. of Oxford; How to Live: Or a Life of Montaigne in One Question and Twenty Attempts at an Answer, 2010, etc.) focuses on a diverse cast of men and women who, beginning in the 1930s, worried over questions of freedom, authenticity, anxiety, and commitment, creating the movement that came to be known as existentialism. Their antecedents were Nietzsche and Kierkegaard, who “pioneered a mood of rebellion and dissatisfaction, created a new definition of existence as choice, action and self-assertion, and made a study of the anguish and difficulty of life.” Dominating Bakewell’s narrative are Jean-Paul Sartre and Simone de Beauvoir, lovers and “compulsive communicators” of every detail of their work. Sartre, appealingly fun-loving (he played piano and sang jazz hits) in his youth, became “monstrous” as he aged: “self-indulgent, demanding, bad-tempered. He was a sex addict who didn’t even enjoy sex, a man who would walk away from friendships saying he felt no regret.” Bakewell was surprised at how much affection she felt for him despite his faults. Certainly he was more likable than Martin Heidegger, who “set himself against the philosophy of humanism and…was rarely humane in his behaviour.” As the author reveals historical context for the philosophers’ work—prewar Paris; the Nazi occupation; postwar debates among internationalists, pro-Americans, and communists—she explains the significance of cafes: “they were the best places to keep warm” for those who lived in cheap, unheated hotel rooms. Albert Camus, Hannah Arendt, Iris Murdoch (Britain’s first popularizer of existentialism), James Baldwin, actress Juliette Gréco, and Emmanuel Levinas are just a few featured in this well-populated book, whose hero, Bakewell writes, is phenomenologist Maurice Merleau-Ponty, “the happy philosopher of things as they are.”

A fresh, invigorating look into complex minds and a unique time and place.