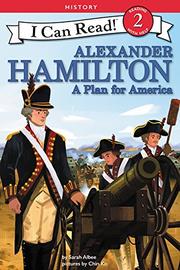 A Plan for America

Albee and Ko take their shot at an early-reader biography about Alexander Hamilton.

Emergent readers (and their caregivers) familiar with Lin-Manuel Miranda’s hit musical Hamilton will be rewarded with what amounts to an illustrated highlights reel of the founding father’s life. Albee opens in medias res by describing Hamilton as “a soldier, a lawyer, and a financial wizard,” before the spare text quickly brings readers to Hamilton’s Caribbean childhood, noting his father’s abandonment, his mother’s death, and his determined rise from poverty. He’s presented as a trusted adviser to George Washington and rival to Thomas Jefferson and Aaron Burr, with Ko’s accompanying digital art depicting him with a smiling man on horseback (Washington), while on the facing page, the two other men scowl. A later spread notes major differences between Jefferson and Hamilton, including acknowledgment that Jefferson enslaved people while “Hamilton was against slavery,” but Washington’s slave-owner status isn’t named, nor is the American Revolution’s impact on Indigenous peoples. Personal milestones, such as marriage to Eliza Schuyler, are noted alongside references to his involvement in the war and his work with the nascent American government. While his death occurs on the page, strategies to keep the text within the comprehension of its audience risk undermining other historical content by omitting such terms as “revolution” and the Federalist Papers (though they do appear in backmatter).

Solid, if not revolutionary.