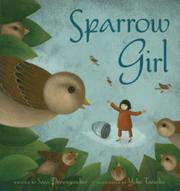 In this sober tale based on Mao Zedong’s 1958 edict to eradicate China’s sparrows to prevent crop damage, a compassionate little girl follows her heart instead of her Leader. When Ming-Li learns of Mao’s plan to eliminate the sparrows by creating noise for three consecutive days, she prophetically fears the terrible din will kill all birds. As mindless mobs beat drums, clang gongs, crash cymbals and explode firecrackers, Ming-Li’s worst fears are realized, but not before she hides seven sparrows, which she feeds and tends in secret. When spring arrives and shocked farmers watch helplessly as locusts decimate their crops, Ming-Li reveals her secret and saves her village from famine. Tanaka’s quiet, simple illustrations in subdued tones match the somber mood. In her red suit, Ming-Li’s solitary figure stands out from the villagers in their uniform blue jackets, reinforcing her individuality. Moving images, such as a double-page spread of dead sparrows falling like “teardrops” while a weeping Ming-Li cradles a limp bird, send a powerful message that one small person can make a big difference. (author’s note) (Picture book. 5-9)