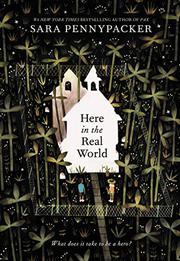 HERE IN THE REAL WORLD

An introverted boy fights to save an empty lot from auction.

Eleven-and-a-half-year-old Ware can’t wait to spend the Florida summer with his grandmother, enjoying “long hours free and alone.” Other adults—including his overprotective, hyperefficient mother and sports-loving father—discourage his being “off in his own world.” But when his grandmother takes a fall, he must trade privacy for “Meaningful Social Interaction” in the Summer Rec program. He finds sanctuary in nearby church ruins, where he meets cynical, secretive Jolene and bird activist Ashley. When the property is slated for auction, medieval-history buff Ware invokes the “Knights’ Code”—a feminist but nonetheless romanticized version of the code of chivalry—resolving to “be always the champion of the Right and the Good” and defend their refuge. Victory, however, takes unexpected forms. Though Pennypacker’s exploration of what “fairness” means is thought-provoking, one-dimensional characterization weakens such powerful themes as abuse, self-advocacy, and self-acceptance. Tough-but-wounded Jolene is little more than a foil for the nearly angelic Ware, whose acute empathy even perceives a cut plant’s “cry of betrayal.” (The intense pain his empathy causes him goes unexamined.) Though introverted or sensitive kids may recognize Ware’s poignant struggles to connect with his parents, his heavy-handed portrayal—which his uncle folds neatly into the sensitive-artist trope—blunts some emotional impact. Most characters, including the kids, appear white; a supportive grocer is Greek.

A well-meaning but belabored recognition of introverts, artists, and activists.