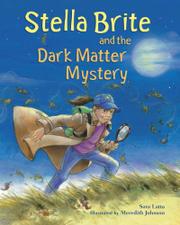 In this very thinly disguised science lesson, a pair of freckle-faced, entirely wholesome-looking young detectives take on two cases at once: finding the Mayor’s missing Pekingese, and joining the hunt for the elusive “dark matter” that scientists posit to explain the universe’s large-scale gravitational behavior. Focusing mainly on the latter, Stella and her little brother Max start at a (books-only) library, then peer through a telescope, snoop around researcher Bella Black’s lab and finally join her in an underground detection facility. In the course of all this, they (and readers) learn about MACHOs (MAssive Compact Halo Objects), WIMPs (Weakly Interacting Massive Particles) and how these enigmatic phenomena were discovered. The dog shows up at the end (sharp-eyed observers will have already spotted it, as it’s been following them around since nearly the beginning), so one case, at least, winds up closed. For readers inclined to carry on with the more cosmic one, Latta ends her story/lecture with a recap and a pair of well-chosen websites. Despite the superfluous plotline, this wins high marks for its clear, specific introduction to one of modern astronomy’s great puzzles. (Picture book/nonfiction. 7-9)