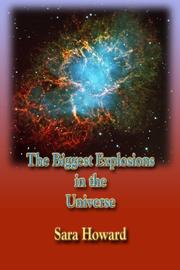 THE BIGGEST EXPLOSIONS IN THE UNIVERSE

A book for young readers about the science of astronomy.

Howard, an aerospace engineer, enthusiastically instructs readers on the intricacies of the stars–the â€œbiggest explosions” of her title. Beginning with a primer on our place in the universe, she then guides readers through the birth of stars, star groupings, dying stars, supernovae, the lifecycle of the sun, â€œweird, wacky, and mysterious” stars and the most violent outbursts in the universe. Enticed by the explosive title, some readers will be especially interested in the more frightening aspects of our cosmos, and the author satisfies with information about the eventual death of our sun, and black holes. Her stated goal is to demystify the lifecycle and role of stars, and with the help of eye-catching photographs and relatively nontechnical language, she succeeds. However, while Howard’s passion for the subject is certainly evident, her ability to connect with her intended audience is less assured–her nimble command of the subject matter is in stark contrast to the awkward tone of the prose. At times, it doesn’t seem like she’s addressing young readers. She begins her book by instructing her readers to â€œpile the whole family into your car,” but it’s unlikely the average child reader would be licensed to drive. On one page, Howard give a complicated lesson on calculating the distance to the edges of our solar system in light years–two pages later, she talks about gravity’s effect on â€œpuppy dogs [and] kitty cats.” Stranger still, she anthropomorphizes the objects she submits to scientific rigor. She claims â€œa star smiles with its light and dances with joy” and that when â€œbaby stars” are born, â€œthey ignite their smiles [and] give off a big cough and blow all the dust and particles far away from themselves.” Treating the stars as entities with discernable lifecycles is one thing, but suggesting that they have emotions is disingenuous.

Despite the author’s fervor, this story ultimately fizzles.