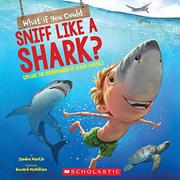 Explore the Superpowers of Ocean Animals

Markle and McWilliam continue their tour of the animal sphere begun with What If You Had Animal Teeth? (2013). Markle supplies scientific descriptions of nine marine creatures accompanied by photographic close-ups and realistic renderings, and McWilliam adds big, funny cartoon views of a thoroughly diverse cast of chimerically altered children sporting, essentially, superpowers. Who, after all, wouldn’t love to have the ability to squeeze through a chain-link fence like the giant Pacific octopus, slide over an icy sidewalk in the shell of a loggerhead sea turtle, or blow up like a starry pufferfish to float over a parade? Each animal is given two double-page spreads. On the first, a photograph appears on the verso, with a lively paragraph explaining the attribute explored, while McWilliam’s illustration on recto comically imagines a human child exploiting that attribute. The following double-page spread provides further information including size, life span, and diet along with information about juveniles of the species and another cartoon. Appealing equally to curiosity about the real world and to readers’ sense of play, this makes a natural companion for other eye-widening explorations of the deep like Corrine Demas and Artemis Roerig’s Do Jellyfish Like Peanut Butter?, illustrated by Ellen Shi (2020), and Brenda Z. Guiberson’s The Most Amazing Creature in the Sea, illustrated by Gennady Spirin (2015).

A winning mix of solid fact and undisguised fun.