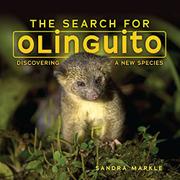 THE SEARCH FOR OLINGUITO

A species of mammal newly identified through museum research is found in the wild in Ecuador.

Comparing olingo pelts and skulls at the Smithsonian Museum of Natural History, Kristofer Helgen found a set that didn't match. Continuing his museum investigations around the world, he found similar specimens in four other collections. DNA testing showed that it was, indeed, a different species, which he named olinguito, "little olingo." One such animal had lived and died in captivity in the 1970s, but did they still exist in the wild? In this latest title, science educator Markle provides a stellar description of a long-term scientific investigation involving research in museums, in laboratories, and in the field. Her clear, well-organized text introduces the scientific question, describes the research, and introduces the newest member of the raccoon family. A two-page spread describes other family members, and there are numerous well-captioned photographs of this appealing new addition as well as American (mostly white) and Ecuadorian scientists at work. She makes clear that these animals were known to local people all along; it was scientists who were surprised. Attractive design and thoughtful backmatter complete the package, a nice complement to Lulu Delacre’s description of the olinguito’s native cloud forest, ¡Olinguito, de la A a la Z!/Olinguito, from A to Z!

A compelling account of the solution of a scientific mystery.